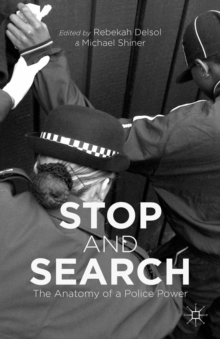 Stop and search: the anatomy of a police power

Palgrave Macmillan
1137336102 / 9781137336101
eBook (Adobe Pdf)
345.410522
23/06/2015
Available
England
English
219 pages
Copy: 10%; print: 10%
Description based on CIP data; item not viewed.
Stop and search is often billed as a vital tool in the fight against crime, yet its use remains controversial. Anger and resentment over the misuse of this tactic were widely implicated among the causes of serious public disorder in 1981 and again in 2011, fuelling an ongoing cycle of crisis and reform that has engulfed British policing. This edited collection provides a detailed assessment of stop and search by leading experts in the field. It considers the legal basis of stop and search, the purpose and function of these powers, their effectiveness in tackling crime and their impact on trust and confidence in the police.

Stop and Search: The Anatomy of a Police Power directly addresses some of the most controversial aspects of stop and search, including its disproportionate use on people from black and minority ethnic groups, its role in counter-terrorism policing and ongoing attempts at regulation and reform. While the main focus is on England and Wales, the collection shows that the challenges posed by stop and search are fundamental to the policing of diverse, democratic societies across the globe.