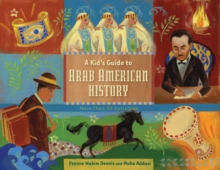 Winner of: 2014 Arab American Book Award, Children/Young Adult Category Many Americans, educators included, mistakenly believe all Arabs share the same culture, language, and religion, and have only recently begun immigrating to the United States. A Kid's Guide to Arab American History dispels these and other stereotypes and provides a contemporary as well as historical look at the people and experiences that have shaped Arab American culture.

Each chapter focuses on a different group of Arab Americans including those of Lebanese, Syrian, Palestinian, Jordanian, Egyptian, Iraqi, and Yemeni descent and features more than 50 fun activities that highlight their distinct arts, games, clothing, and food.

Along the way they will learn to count in Kurdish, pick up a few Syrian words for family members, learn a Yemeni saying, and speak a little Iraqi. Short biographies of notable Arab Americans, including actor and philanthropist Danny Thomas, singer Paula Abdul, artist Helen Zughaib, and activist Ralph Nader, demonstrate a wide variety of careers and contributions.