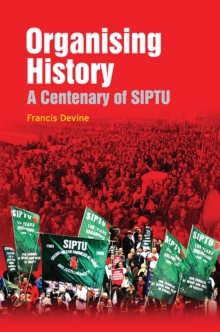 Francis Devine traces the history of this key institution in modern Ireland from the foundation of the IT&GWU in 1909 to the modern day.

The key events of the heroic age of trade unionism are given due notice, most particularly the famous lock-out of 1913.

Larkin and James Connolly are the presiding figures of the early decades and from the 1920s a succession of influential IT&GWU leaders, including William O'Brien, John Conroy, Michael Mullen and John Carroll, guided the affairs of the larger union and secured its position in Irish life.

The Larkinite FWUI, although smaller, maintained the potency of the radical tradition in the Irish labour movement, under the leadership of James Larkin Junior, Paddy Cardiff and William Attley. The last twenty-five years has seen a decline in overall union density, although the movement remains a critical element of social partnership.

Francis Devine's history is an authoritative overview of Ireland's largest union over the past one hundred years, placing its changing fortunes in their appropriate historical context.