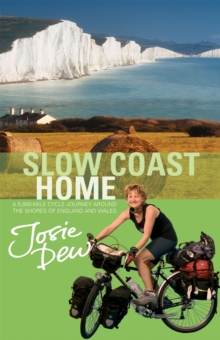 Slow coast home : a 5000-mile journey around the shores of England and Wales

Josie Dew's love of cycling has taken her across the world, travelling everywhere from Japan and Mexico to Iceland, India and Algeria.

In her latest book, she sets off on another quirky and riotous ride, choosing to circumnavigate the coastline of the British Isles. And she discovers that her homeland can be as surprising and full of incident as anywhere she has ever been.

Beginning in Portsmouth, Josie sets off in a clockwise direction after a Shetland grandmother warns her that she'll end up meeting the devil if she travels anti-clockwise.

Through rain, hail, floods, bitter temperatures, minor earthquakes and dusty drought, Josie pedals on, eventually returning to Land's End to complete Stage One of her remarkably lengthy odyssey along 5,000 miles of seaside, estuaries, creeks and islands.

But is all as it seems? Who is the mysterious builder who appears at all the wrong moments?

Who are the two-wheeled taggers-on lurking in her wake?

What did she find at Puckpool Point, Bozomzeal and Woon Gumpus? And how did Josie so badly miscalculate her approach to the seafront at Newhaven that she landed in France?