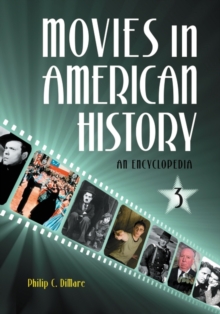 By: DiMare, Philip C.(Edited by)

This provocative three-volume encyclopedia is a valuable resource for readers seeking an understanding of how movies have both reflected and helped engender America's political, economic, and social history. Movies in American History: An Encyclopedia is a reference text focused on the relationship between American society and movies and filmmaking in the United States from the late 19th century through the present.

Beyond discussing many important American films ranging from Birth of a Nation to Star Wars to the Harry Potter film series, the essays included in the volumes explore sensitive issues in cinema related to race, class, and gender, authored by international scholars who provide unique perspectives on American cinema and history.

Written by a diverse group of distinguished scholars with backgrounds in history, film studies, culture studies, science, religion, and politics, this reference guide will appeal to readers new to cinema studies as well as film experts.

Each encyclopedic entry provides data about the film, an explanation of the film's cultural significance and influence, information about significant individuals involved with that work, and resources for further study. Provides 450 A-Z entries that comprehensively cover the historical significance of subjects, people, and films of the American cinemaContains contributions from 150 distinguished interdisciplinary scholars offering their analysis on the role of movies in American historyIncludes reference materials and suggestions for further reading with every entry