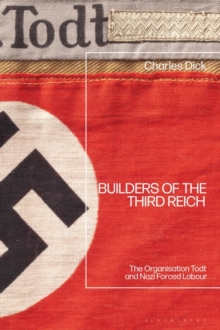 Builders of the Third Reich : the Organisation Todt and Nazi forced labour

This is the first comprehensive critical study of the Organisation Todt (OT), a key institution which oversaw the Third Reich's vast slave labour programme together with the SS, Wehrmacht and industry.

The book breaks new ground by revealing the full extent of the organisation's brutal and murderous operations across occupied Europe and in the Reich.

For the first time, Charles Dick provides a strong voice for camp survivors overseen by the OT, drawing on an extensive collection of personal accounts and analysing the violence they endured. Builders of the Third Reich shows Hitler used the OT, which had a labour force of around 1.5 million people in 1944, as an instrument of subjugation and occupation to project German imperial power.

Drawing on a broad range of primary sources, it demonstrates how the organisation participated in the plunder of Europe's raw materials and manpower, greatly boosting the German war economy.

The book reveals how OT staff shot, beat or worked tens of thousands of prisoners to death, both within the SS-run concentration camp system and outside it, with analysis of OT operations showing that where it had sole, or very high levels of control over camps, prisoner death rates were extremely high.

Examining how engineers and builders, individuals who fitted the category of 'ordinary men' as precisely as any other group so far examined by historians, perpetrated war crimes, this volume reflects on how few OT personnel were interrogated or came to trial and how the organisation passed largely under the radar of post-war prosecutors, researchers and the general public.