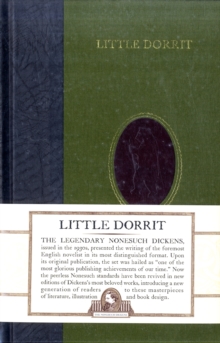 Part of the Nonesuch Dickens series

"Little Dorrit", originally serialized between 1855 and 1857, satirizes the shortcomings of the government and society of the period.

This popular novel introduces a rich and memorable array of characters trying to navigate an often hostile capital symbolised by the Marshalsea gaol, where Dickens' own father had been imprisoned.

This is a scathing social and political satire within a heart-warming story of love and devotion...Based on the world-famous "Nonesuch Press" edition of 1937, the text is taken from the 1867 "Chapman and Hall" edition, which became known as the "Charles Dickens" edition, and was the last edition to be corrected by the author himself."The Nonesuch" edition contains illustrations selected by Dickens himself, by artists including Hablot Knight Browne ('Phiz'), George Cruikshank, John Leech, Robert Seymour and George Cattermole.

The new "Nonesuch Dickens" reproduces the original elegance of these beautiful editions.

Each book is wrapped in a protective, clear acetate jacket.