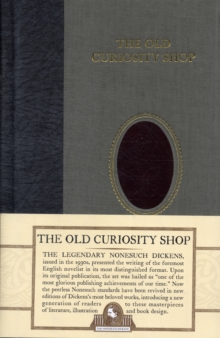 Raised by her loving grandfather, the actions of the malevolent Quilp sees the pair cast out of their home and falling into poverty.

A moving story of courage and pursuit, the novel blends a realistic portrayal of the damaging effects of industrialisation with fairytale elements.

It is based on the world-famous Nonesuch Press edition of 1937.

The text is taken from the 1867 Chapman and Hall edition, which became known as the Charles Dickens edition, and was the last edition to be corrected by the author himself.

The new Nonesuch Dickens reproduces the original elegance of these beautiful editions.