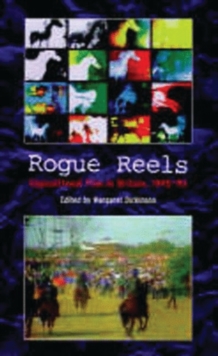 Margaret Dickinson's history of oppostional film is a pioneering account of an important by little documented aspect of modern British Cinema: the often extreme form of independent cinema that accompanied the radical politics of the 1960s and 70s. During the 70s an organized independent film and video movement emerged (including such filmmaking groups as London Filmmakers' Co-op, Cinema Action, Amber, Liberation Films and Sheffield Co-op).

This avant-garde exerted an increasing influence within the British media mainstream - changing attitudes and practice, and enabling cross-over work by filmmakers such as Peter Greenaway and Sally Potter.

This oppostional sector revolutionized British media, especially during the formation of Channel Four at the start of the 1980s, even as the political landscape at large was shifting dramatically to the right. Organized into three parts, "Rogue Reels "provides the first overview of the various strands of politicized filmmaking that emerged in postwar Britain.

Part I is a concise history of the movement. Part II collects key texts and documents form the period 1971-92.

Part III is made up of seven oral histories of the most influential production houses.

Recuperating the radical tradition of postwar filmmaking (which continues to impact on today's media culture), "Rogue Reels" raises urgent issues of policy and practice. Mixing narrative with first-hand accounts, and the important statements and documents of this movement the book provides the first overview of the different strands of filmmaking that are still impacting on avant-garde and mainstream practice.