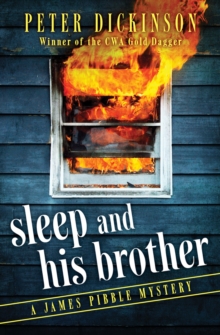 Sleep and His Brother

Part of the The James Pibble Mysteries series

A strange malady afflicts the children of McNair House in this British mystery featuring former Scotland Yard superintendent James Pibble, from CWA Gold Dagger winner Peter Dickinson Recently given the sack by Scotland Yard, James Pibble arrives at McNair House on a private matter, only to find that this charitable institution is not at all what it seems.

The children who live here have a rare disease called cathypny, which renders them sleepy and fat.

It also imbues them with special telepathic powers, which is how one boy instantly pegs Pibble as a cop. A dreamy nine-year-old named Marilyn has perceived that someone at McNair House is in mortal danger.

With all the research money that's suddenly pouring in, the pressure is on to prove that these children really are empaths; a Greek tycoon is banking on it.

But Pibble is beginning to suspect the worst kind of fraud: an exploitative con game using innocent young lives as bait. And one of the children may be the target of an escaped killer obsessed with the supernatural.

Now Pibble must pit his own finely honed instincts against an adversary who can see the future: a world without James Pibble. Sleep and His Brother is the 4th book in the James Pibble Mysteries, but you may enjoy reading the series in any order.