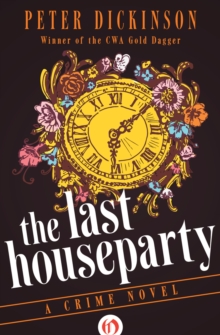 The Last Houseparty : A Crime Novel

In this gripping novel by CWA Gold Dagger winner Peter Dickinson, the survivor of a manor-house crime delves into the past to solve a mystery At the elegant English manor known as Snailwood, tourists come daily to hear decades-old gossip about the second wife of the sixth earl.

Zena was a remarkable young woman whose scandalous reputation has been dimmed neither by time nor by her bizarre death.

In the 1930s, Zena was the star of a notorious party set whose members included playwrights, politicians, and Nazi sympathizers.

They passed wild weekends at Snailwood, arguing about politics and drinking until dawn.

At the center of their parties was the manor's magnificent tower clock.

The clock stopped long ago, but the darkness of its legacy continues to spread. When a workman offers to fix the clock for free, the only remaining survivor of the old days is forced to revisit her memories of Zena's last mad party, when death came to Snailwood and Britain changed forever.