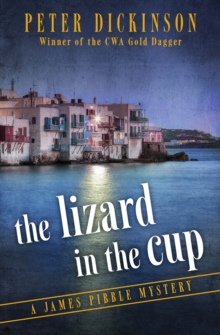 The Lizard in the Cup

Part of the The James Pibble Mysteries series

An ex-Scotland Yard superintendent is caught up in an international mystery: "The most original crime novelist to appear for a long, long time." -The Guardian The West Indies island of Hog's Cay is soon to open for tourism, but the money behind the deal comes from the Mafia, which is ready to turn the island into the next Vegas. And the politicos in charge have given Greek tycoon Thanassi Thanatos the contract.

That's where James Pibble comes in. The former Scotland Yard superintendent has come to Thanatos's hideaway on the Ionian island of Hyos to protect the Greek tycoon from the Mob, which doesn't like anyone muscling in on its territory.

Rumor has it the crooks are eyeing Hyos for their booming drug-smuggling trade.

Throw in British intelligence and a clandestine American operation, and you've got an international free-for-all. The mystery deepens when Pibble uncovers a monastery led by Fathers Polydore and Chrysostom, who may be the richest men on the island. And why is an English artist named Nancy living in a primitive hut?

The answers may lie in a myth about a lizard called the samimithi, a harbinger of violent death. With superstition and distrust running rampant, Pibble races to stop a conspiracy set in motion by an obsessive love with the power to kill. The Lizard in the Cup is the 5th book in the James Pibble Mysteries, but you may enjoy reading the series in any order.