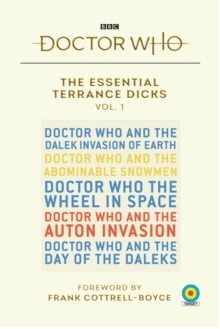 It can start with me, you know, start with Dicks and work its way up to Dickens - as long as you get them reading." - Terrance DicksFor over 50 years, Terrance Dicks was the secret beating heart(s) of Doctor Who - from joining production of The Invasion in 1968 to his final short story in 2019.

As the undisputed master of Doctor Who fiction, Terrance wrote 64 Target novels from his first commission in 1973 to his last, published in 1990.

He helped introduce an entire generation to the pleasures of reading and writing, and his fans include Neil Gaiman, Sarah Waters, Mark Gatiss, Alastair Reynolds, Russell T Davies, Steven Moffat, Frank-Cottrell Boyce, and Robert Webb, among many others. This special two-volume collection, published on the anniversary of Terrance's death, features the very best of his Doctor Who novels as chosen by fans - from his first book, The Auton Invasion, to his masterwork, the 20th anniversary celebration story The Five Doctors, voted all-time favourite. With forewords by Frank Cottrell-Boyce and Robert Webb, The Essential Terrance Dicks is a masterclass in contemporary fiction, by a writer of unlimited imagination. Volume One contains, complete and unabridged:DOCTOR WHO AND THE DALEK INVASION OF EARTHDOCTOR WHO AND THE ABOMINABLE SNOWMENDOCTOR WHO AND THE WHEEL IN SPACEDOCTOR WHO AND THE AUTON INVASIONDOCTOR WHO AND THE DAY OF THE DALEKS