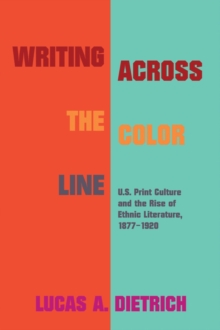 Writing across the Color Line : U.S. Print Culture and the Rise of Ethnic Literature, 1877-1920

By: Dietrich, Lucas A.

The turn of the twentieth century was a period of experimental possibility for U.S. ethnic literature as a number of writers of color began to collaborate with the predominantly white publishing trade to make their work commercially available.

Chesnutt, Finley Peter Dunne, W. E. B. Du Bois, and Sui Sin Far -- drew readers into their texts by subverting existing stereotypes and adapting styles of literary regionalism and dialect writing.Writing across the Color Line details how this body of literature was selected for publication, edited, manufactured, advertised, and distributed, even as it faced hostile criticism and frequent misinterpretation by white readers.

Shedding light on the transformative potential of multiethnic literature and the tenacity of racist attitudes that dominated the literary marketplace, Dietrich proves that Native American, African American, Latinx, Asian American, and Irish American writers of the period relied on self-caricature, tricksterism, and the careful control of authorial personae to influence white audiences.