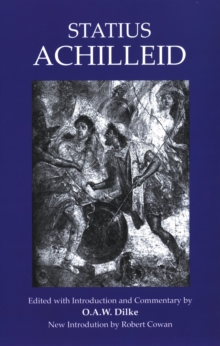 Statius' Achilleid is perhaps the most remarkable of all Latin epic poems.

Its project - to tell the whole life of Achilles - was cut short by the poet's untimely death.

Yet the completed first book and the earliest part of the second have a charm and freshness matched only in some of Ovid's most lively and engaging work.

The poem tells how the sea-nymph Thetis, in a vain attempt to save her son from his destined end in the Trojan war, hid him on the island of Scyros, disguised as a girl.

There he fell in love with the beautiful Deidamia, but at the same time, with the idea of glory in war.

His feminine disguise was eventually penetrated by Ulysses and Diomedes, who tricked him into exposure of his truly warlike aspirations.

In relating this story Statius explores the nature of gender and the limits of the epic genre, while playfully and wittily positioning himself in the epic - and wider - poetic tradition.

These themes are explored in a new introduction by Robert Cowan, which surveys the latest research on the poem.

Its assessment, very much in the modern critical manner, contrasts with and complements the traditional textual and philological commentary by O.A.W.

Dilke. The combination of these two distinct approaches will assist undergraduates and postgraduates in reading the text, and, at the same time, it will provide a valuable resource for the more advanced scholar.