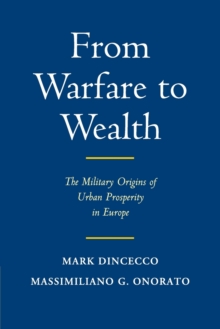 From warfare to wealth : the military origins of urban prosperity in Europe

Part of the Political economy of institutions and decisions series

The economic rise of Europe over the past millennium represents a major human breakthrough.

To explain this phenomenon, this book highlights a counterintuitive yet central feature of Europe's historical landscape: warfare.

Security was a traditional function of the city. To mitigate the high costs of conflict in the countryside, rural populations migrated to urban centers.

Over time, the city's historical role as a safe harbor translated into local economic development through several channels, including urban political freedoms and human capital accumulation.

To make this argument, the book performs a wide-ranging analysis of a novel quantitative database that spans more than one thousand years, from the fall of the Carolingian Empire to today.

The book's study of urban Europe's historical path from warfare to wealth provides a new way to think about the process of long-run economic and political development.