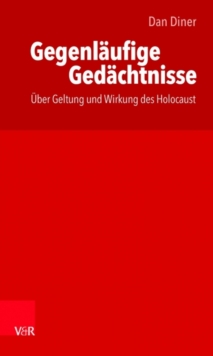 The memory of mass crimes constitutes the parameters of universal ethics.

The memory of the Holocaust was the reason for this.

The annihilation of European Jews was of paradigmatic importance.

In the meantime, other memories of mass crimes are also calling for public memory and thus recognition.

Such a pluralism of memories holds a not inconsiderable potential for conflict, especially if the different misfortunes are attributed to one and the same historical event - the Second World War.

Then opposing constellations and competitions of memory appear - not only between the political cultures of western and eastern Europe, but also and especially between European and colonial memories.

Dan Diner's essay, now available in a bilingual edition, takes up the problem of conflicting memories of the Second World War and the Holocaust in terms of history and memory.

By reaffirming the meaning of "Auschwitz" as a breach of civilization, the conditions of historical judgment and recognition are reflected in the memory against this very background.

Dramatic differences, even contradictions, between Western and non-European cultures - especially that of Islam - are heralded here.