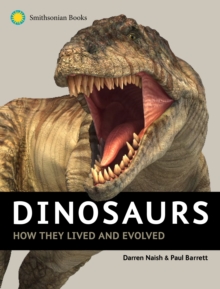 Dinosaurs : How They Lived and Evolved

1588345823 / 9781588345820
Usually dispatched within 2 weeks
Dinosaurs are one of the most spectacular groups of animals that have ever existed. Many were fantastic, bizarre creatures that still capture our imagination: the super-predator Tyrannosaurus, the plate-backed Stegosaurus, and the long-necked, long-tailed Diplodocus. Dinosaurs: The Ultimate Guide to How They Lived taps into our enduring interest in dinosaurs, shedding new light on different dinosaur groups. Leading paleontology experts Darren Naish and Paul Barrett trace the evolution, anatomy, biology, ecology, behavior, and lifestyle of a variety of dinosaurs. They also remind us that dinosaurs are far from extinct: they present evidence supporting the evolution of dinosaurs to birds that exist today as approximately ten thousand different species. Throughout their narrative Naish and Barrett reveal state-of-the-art new findings shaping our understanding of dinosaurs. Readers will discover, for example, how the use of CT-scanning enables scientists to look inside dinosaur skulls, thus gaining new insight into their brains and sense organs. Dinosaurs is a must-have for all those wanting to keep up to date about these dynamic, complicated creatures.