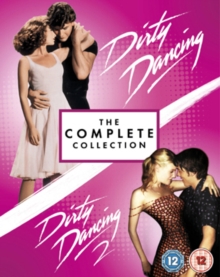 A dance romance double-bill. In 'Dirty Dancing' (1987) Frances 'Baby' Houseman (Jennifer Grey) is a teenage girl on holiday with her family at a resort in the Catskill Mountains.

Stumbling upon an off-limits employees-only party, she witnesses the staff getting down and dirty to the R 'n' B hits of the day.

The hotel's dance instructor Johnny (Patrick Swayze) catches her eye in particular, and, despite their differences in class, age and experience, the couple begin to fall in love.

The soundtrack features the Oscar-winning song '(I've Had) the Time of My Life' as performed by Bill Medley and Jennifer Warnes. 'Dirty Dancing 2' (2004) follows the blossoming relationship between nice, well-brought-up American girl Katey (Romola Garai) and wrong-side-of-the-tracks Xavier (Diego Luna). 18-year-old Katey moves to Havana, Cuba with her parents in the late 1950s, just as the country teeters on the brink of a revolutionary uprising.

She is instantly drawn to local bus-boy Xavier, and defies the wishes of her parents by accompanying him to a nightclub where he teaches her how to 'dirty' dance Cuban-style.

The two grow increasingly close, but when Fidel Castro comes to power, Katey's parents decide to flee for the US - leaving Katey to make the ultimate decision.