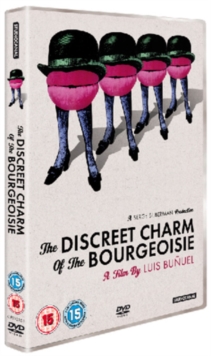 The Discreet Charm of the Bourgeoisie

Thévenot's sister Florence (Bulle Ogier), to the house of Henri and Alice Sénéchal (Jean-Pierre Cassel and Stéphane Audran), who are hosting a dinner party.

On arrival, however, Alice explains that she expected them the following evening and has no dinner prepared.

Inviting Alice to join them for dinner at a local inn, the party quickly leave when they discover that the manager died a few hours earlier and his former employees are holding a vigil over his corpse, awaiting the coroner.

So begins a series of increasingly bizarre episodes and surreal dream sequences as the diners, over the course of the following days, find themselves repeatedly frustrated in their attempts at eating out.