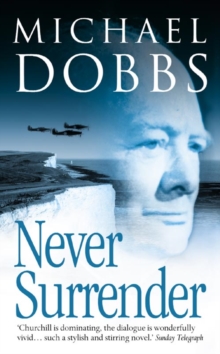 Winston Churchill embarks on a battle of wills with Adolf Hitler in the run-up to Dunkirk.

The compelling new historical novel from the acclaimed author of Winston's War.

Winston Churchill at his lowest ebb -- pitted in personal confrontation with Adolf Hitler, and with ghosts from his tormented past.

In his bestselling novel Winston's War, Michael Dobbs brilliantly combined imagination and fact in a vivid recreation of Churchill's remarkable journey from the wilderness to Downing Street.

It won acclaim from critics and caught the mood of the reading public.

Now he draws on his unrivalled insight into the workings of power to bring the Greatest Briton to life once again. 10 May 1940. Hitler launches his devastating attack that within days will overrun France, Holland and Belgium, and that will bring Britain to its knees at Dunkirk.

Only one man, Winston Churchill, seems capable of standing in his way.

Yet Churchill is isolated, mistrusted by many of his colleagues, and tormented by ghosts from his past.

This is the story of those four crucial weeks in which Churchill and Hitler faced each other in a battle of wills.