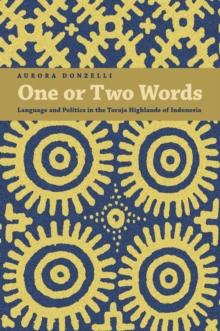 One or Two Words : Language and Politics in the Toraja Highlands of Indonesia

The expression "one or two words" is used by the Toraja highlanders of Indonesia to refer euphemistically to their highly elaborate form of political speechmaking.

Moving from this understatement, which denotes the meaningfulness of transient acts of speech, One or Two Words offers an analysis of the shifting power relations between centers and peripheries in one of the world's most linguistically diverse countries.

Drawing on long-term fieldwork, this book explores how people forge forms of collective belonging to a distinctive locality through the exchange of spoken words, WhatsApp messages, ritual gifts of pigs and buffaloes, and the performance of elaborate political speeches and ritual chants.

Aurora Donzelli describes the complex forms of cosmopolitan indigeneity that have emerged in the Toraja highlands during several decades of encounters with a variety of local and international interlocutors.

By engaging wider debates on the dynamics of cultural and linguistic change vis-a-vis globalizing influences, the book sheds light onto a hitherto neglected dimension of post-Suharto Indonesia: the recalibration of power relations between national and local languages prompted by recent institutional transformations and the re-articulation of the relations between the central state and its peripheries through acts of speech.