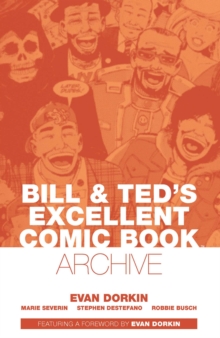 Part of the Bill & Ted series

Spend some time with your old friends Bill and Ted in this totally resplendent, triumphant, stellar, non-heinous and most classically excellent comic collection. The most non-non-non-NON-heinous Eisner Award-nominated series, Bill & Ted's Excellent Comic Book, has returned.

Preston and Theodore Logan party in celebration of their nuptials, deal with jealous rivals, and even chase down Death himself.

The collection includes Evan Dorkin's full 11 issue run on the series, the comic adaptation of Bill & Ted's Bogus Journey, a gallery of cover art, and fan letters from the original comic run, for a total of 368 non-heinous full color pages. Most excellent.