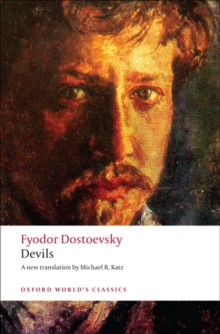 Devils, also known in English as The Possessed and The Demons, was first published in 1871-2.

The third of Dostoevsky's five major novels, it is at once a powerful political tract and a profound study of atheism, depicting the disarray which follows the appearance of a band of modish radicals in a small provincial town.

Dostoevsky compares infectious radicalism to the devils that drove the Gadarene swine over the precipice in his vision ofa society possessed by demonic creatures that produce devastating delusions of rationality. Dostoevsky is at his most imaginatively humorous in Devils: the novel is full of buffoonery and grotesque comedy.

The plot is loosely based on the details of a notorious case of political murder, but Dostoevsky weaves suicide, rape, and a multiplicity of scandals into a compelling story of political evil. _ This new translation also includes the chapter `Stavrogin's Confession', which was initially considered to be too shocking to print.

In this edition it appears where the author originally intended it.

Each affordable volume reflects Oxford's commitment to scholarship, providing the most accurate text plus a wealth of other valuable features, including expert introductions by leading authorities, helpful notes to clarify the text, up-to-date bibliographies for further study, and much more. _ _