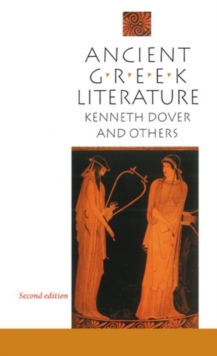 Part of the Opus series

This historical survey of Greek literature from 700 BC to 550 AD concentrates on the principal authors and quotes many passages from their work in translation, to allow the reader to form his own impression of its quality, including Homer, Plato, Aristophanes, and Euripides.

Attention is drawn both to the elements in Greek literature and attitudes to life which are unfamiliar to us, and to the elements which appeal most powerfully to succeeding generations.

Although it is recognized that this appeal lies above all in the most creative and inventive period (700-300 BC), an account is given of the eight hundred years which followed, which saw the impact of earlier inspirations.

Poetry, tragedy, comedy, history, science, philosophy, and oratory are all examined through the available literature.

This new edition has been revised to take account of recent scholarship, such as the influence of oriental traditions of Greek literature, and includes several new translations and a thoroughly updated bibliography.