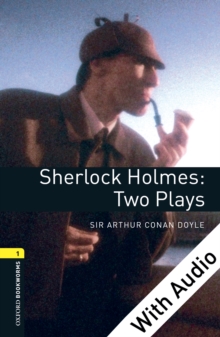 A level 1 Oxford Bookworms Library graded reader. This version includes an audio book: listen to the story as you read.Retold for Learners of English by John Escott.Sherlock Holmes is the greatest detective the world has ever seen, and he knows it.

As the famous bank-robber, John Clay, says to him, 'You think of everything, Mr Holmes.

You're very clever.' People come to him with problems that no one, not even the police, can solve.

Holmes sits, and thinks, and smokes his pipe, and in the end he finds the answer.

In these plays, based on two of his stories, Holmes, helped by his old friend, Dr Watson, uses his great intelligence to solve two unusual and interesting cases.