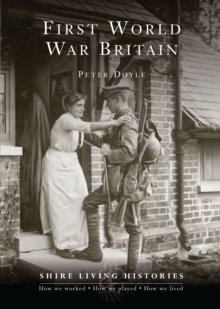 When Britain declared war on Germany in August 1914, most expected the war to be over by Christmas, and only a handful forecast the length of the conflict, or the impact it would have on a civilian population whose experience of war to date had been reading of the exploits of the British Army in distant Sudan or South Africa.

The First World War would change British society, often irrevocably and sometimes for the better, but it also brought hardship and fear.

Rationing, government restrictions, censorship, and bombardment from both the sea and air, meant that for the first time, civilians found themselves part and sometimes victims, of 'total war'.

Shopkeepers might boast that it was business as usual, but nobody could ignore the social upheaval, the restrictions introduced by new legislation or the strains and privations facing day-to-day existence.

Nonetheless, the war also saw Britain galvanise itself in a collective effort to increase industrial productivity, domestic self-sufficiency and reduce waste - all key factors in helping to win the war.

Lucinda Gosling explores how the people left at home adapted their lifestyles to meet the challenges of the time, looking at the minutiae of everyday life such as rationing-influenced recipes and popular toys, alongside broader issues like food shortages and industrial unrest.