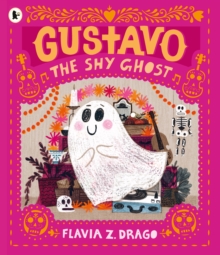 THE WINNER OF THE KLAUS FLUGGE PRIZE 2021A #1 NEW YORK TIMES BESTSELLER "A great story about making friends by being yourself and the illustrations are a constant visual delight" Malorie BlackmanGustavo is a ghost.

He is good at doing all sorts of paranormal things, like walking through walls, making objects fly and glowing in the dark. And he loves playing beautiful music on his violin. But Gustavo also has a problem. He is SHY. Which means some things are harder for him to do, like getting in a line to buy eye-scream or talking to the other monsters.

More than anything, he wants to make a friend. So, plucking up all his courage, he sends a very special letter: "Dear Monsters, I would like to invite you to my violin concert at the Day of the Dead party..."With exquisite detail and humour, Flavia Z.

Drago's vivid illustrations tell a sweet and offbeat story of friendship and courage.