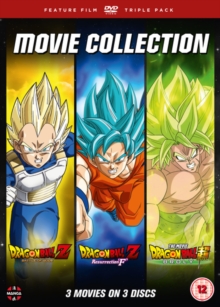 Three feature length instalments of the Japanese anime series, based on the manga by Akira Toriyama.

In 'Battle of Gods' (2013) Majin Buu (voice of Kôzô Shioya) is defeated in battle and Beerus (Kouichi Yamadera), the God of Destruction, awakens from his long sleep to find out who finally managed to defeat the mighty warrior.

When Beerus tracks down the victor, Son Goku (Masako Nozawa), he challenges him to the fiercest battle of his life.

In 'Resurrection 'F'' (2015), after he is resurrected by his servants, the evil Frieza returns to Earth with an army seeking revenge and it is up to rival Saiyan warriors Goku and Vegeta (Ryô Horikawa) to defeat the powerful villain.

However, their desire to fight alone instead of working together puts the planet in jeopardy.

Finally, in 'Broly' (2018), Goku devotes himself to seeking an even higher level of greatness after the events at the Tournament of Power.

When he and Vegeta discover a new Saiyan by the name of Broly (Bin Shimada) they endeavour to find out how he survived after they believed that all Saiyans had been wiped out.