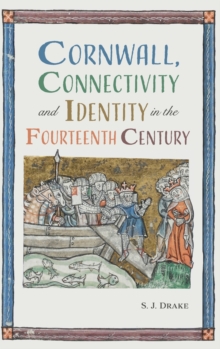 Cornwall, connectivity and identity in the fourteenth century

Winner of The Federation of Old Cornwall Societies (FOCS) Holyer an Gof Cup for non-fiction, 2020. Stretching out into the wild Atlantic, fourteenth-century Cornwall was a land at the very ends of the earth.

Within its boundaries many believed that King Arthur was a real-life historical Cornishman and that their natal shire had once been the home of mighty giants.

Yet, if the county was both unusual and remarkable, it still held an integral place in the wider realm of England. Drawing on a wide range of published and archival material, this book seeks to show how Cornwall remained strikingly distinctive while still forming part of the kingdom.

It argues that myths, saints, government, and lordship all endowed the name and notion of Cornwall with authority in the minds of its inhabitants, forging these people into a commonalty.

At the same time, the earldom-duchy and the Crown together helped to link the county into the politics of England at large.

With thousands of Cornishmen and women drawn east of the Tamar by the needs of the Crown, warfare, lordship, commerce, the law, the Church, and maritime interests, connectivity with the wider realm emerges as a potent integrative force. Supported by a cast of characters ranging from vicious pirates and gentlemen-criminals through to the Black Prince, the volume sets Cornwall in the latest debates about centralisation, devolution, and collective identity, about the nature of Cornishness and Englishness themselves. S.J. DRAKE is a Research Associate at the Institute of Historical Research.

He was born and brought up in Cornwall.