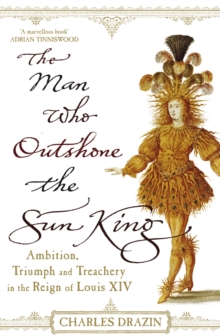 The man who outshone the Sun King : ambition, triumph and treachery in the reign of Louis XIV

*In 1664, the musketeer D'Artagnan rode beside a heavily-armoured carriage as it rumbled slowly southwards from Paris, carrying his great friend Nicolas Foucquet to internal exile and life imprisonment in the fortress of Pignerol.

There he would be incarcerated in a cell next door to the Man with the Iron Mask... *From a glittering zenith as the King's first minister, builder of the breathtaking chateau of Vaux-le-Vicomte, collector of books, patron of the arts and lover of beautiful women, Foucquet had fallen like Icarus.

Charged with embezzlement, he was convicted and sentenced to life imprisonment. *Charles Drazin's riveting account brings to life the rich, hazardous and machiavellian world in which Foucquet lived.

His charm, cunning and charisma enchanted and beguiled those around him, but in them lay the seeds of his destruction.