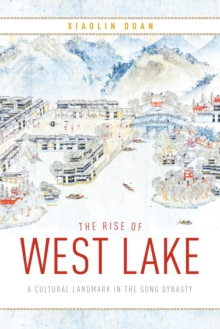 The Rise of West Lake : A Cultural Landmark in the Song Dynasty

Lovely West Lake, near scenic Hangzhou on China's east coast, has been celebrated as a major tourist site since the twelfth century.

Now as then, visitors boat to its islands, stroll through its gardens, worship in its temples, and immortalize it in poetry and painting.

Hangzhou and West Lake have long served as icons of Chinese landscape appreciation, literary and artistic expression, and tourism. In the first in-depth English-language study of this picturesque locale, Xiaolin Duan examines the interplay between human enterprise and the natural environment during the Song dynasty (960-1279).

After the Song lost north China to the Jurchens and the imperial court fled south, a new capital was established at Hangzhou, making the area the national political and cultural center.

West Lake became a model for idealized nature, fashioned by the diverse activities of its visitors.

Duan shows how engagements in, on, and around West Lake influenced visitors' conceptualization of nature and sparked the emergence of the lake as a tourist destination, highlighting how the natural landscape played a role in shaping social and cultural constructs. Incorporating evidence from miscellanies, local and temple gazetteers, paintings, maps, poems, and anecdotes, The Rise of West Lake explores the complexity of the lake as an interactive site where ecological and economic concerns contended and where spiritual pursuits overlapped with aesthetic ones.