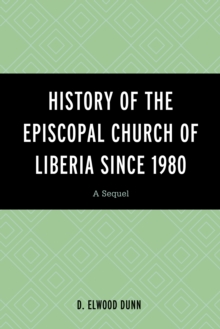 History of the Episcopal Church of Liberia since 1980 : a sequel

It is a narrative shaped by contexts-context of the Episcopal Church and its Christian witness through the episcopacies of Diocesan Bishops George Daniel Browne, Edward Wea Neufville II, and Jonathan B.

B. Hart; the context of a modernizing Liberia plunged into unprecedented political violence by a military coup d'etat in 1980 and a devastating civil war that ensued and consumed the country for some 14 years; and the context of shifting external ties with the American Church, the Liberian Episcopal community in the United States, and the Church of the Anglican Province of West Africa.

D. Elwood Dunn examines what the church's contemporary history uncovers about Liberia's social history as it juxtaposes national identity issues with religious syncretism (a mixture of African traditional religions, Islam, some elements of Christianity, and basic human secularism) and suggests challenges for the Episcopal Church's Christian witness going forward. All of this is done in four concise chapters successively addressing the episcopate of Bishop Browne, a critical interregnum period between Browne and his successor, Bishop Neufville, the episcopate of Neufville, and initiating the episcopate of incumbent Bishop Hart.

This is followed by a general conclusion and assessment of the church's work.