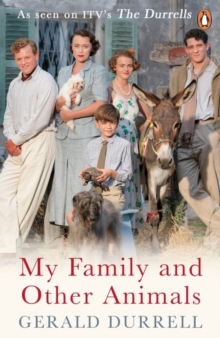 My family and other animals

My family and other animals

Part of the The Corfu Trilogy series

My Family and Other Animals is the bewitching account of a rare and magical childhood on the island of Corfu by treasured British conservationist Gerald Durrell.

Escaping the ills of the British climate, the Durrell family - acne-ridden Margo, gun-toting Leslie, bookworm Lawrence and budding naturalist Gerry, along with their long-suffering mother and Roger the dog - take off for the island of Corfu. But the Durrells find that, reluctantly, they must share their various villas with a menagerie of local fauna - among them scorpions, geckos, toads, bats and butterflies. Recounted with immense humour and charm My Family and Other Animals is a wonderful account of a rare, magical childhood. 'Durrell has an uncanny knack of discovering human as well as animal eccentricities' Sunday Telegraph'A bewitching book' Sunday Times