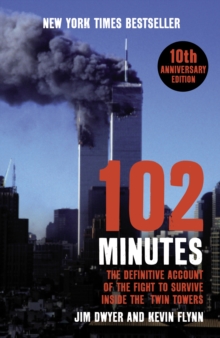 102 minutes : the untold story of the fight to survive inside the Twin Towers

At 8.46 am on September 11, 2001, 14,000 people were inside the Twin Towers in New York - reading emails, making calls, eating croissants... over the next 102 minutes each would become part of a drama for the ages, one truly witnessed only by the people who lived through it - until now.

Of the millions of words written about that unforgettable day, most have been from outsiders. "New York Times" reporters Jim Dwyer and Kevin Flynn have taken the more revealing approach - reporting solely from the perspective of those inside the towers, "102 Minutes" is the epic count of ordinary men and women, and includes incredible stories of bravery, courage, and overcoming unbelievable odds including the construction manager and his colleagues who pried open the doors and saved dozens of people in the north tower; the police officer who was a few blocks away, filing his retirement papers, but grabbed his badge and sprinted to the buildings; the window washer stuck in a lift fifty floors up who used a squeegee to escape; and the secretaries who led an elderly man down eighty-nine flights of stairs.Chance encounters, moments of grace, a shout across an office shaped these minutes, marking the border between fear and solace, staking the boundary between life and death.

Crossing a bridge of voices to go inside the infernos seeing cataclysm and herosim one person at a time, Dwyer and Flynn tell the affecting, authoritative saga of the men and women - the 12,000 who escaped and the 2,749 who perished - as they made 102 minutes count as never before.