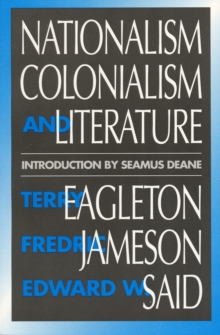 The three essays in this volume were originally published as individual pamphlets by the Field Day Theatre Company in Derry, Nothern Ireland.

Founded in 1980 as a theatre cmpany, Field Day has eveolved as a publisher concerned with the typically Irish blend of political and cultural (mainly literary) forces which requires fresh analysis in view of the existing Irish political crisis.

As a result, Field Day has published a series of pamphlets, in groups of three, to which the three essays printed here are the most recent contribution.

Each of the essays deals with a different aspect of nationalism and the role of cultural production as a force in understanding the aftermath of colonization.

Frederic Jameson discusses the problematic relationship between the Third World and the "first world".

Edward Said focuses on the poetry of Yeats and the role it played in the "liberationist" movement of decolonization.