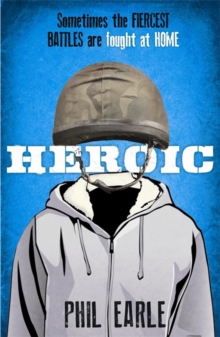 'For the past five weeks I'd prayed that I'd never see my brother's name spelt out in poppies.

In the weeks that followed I often wished I had.'Jammy and Sonny McGann are brothers, but that's where the similarities end.

One is calm when the other is angry; one has a plan while the other lives purely in the moment.

When Jammy returns from Afghanistan a very different man to the one who left, it's Sonny who is left to hold things together.

But just how far will he go to save the brother who always put him first?Inspired by S.E.

Hinton's The Outsiders and by the battles facing young soldiers all over the world, this is a devastating novel about brotherhood and sacrifice, from the award-winning author of Being Billy and Saving Daisy. ** Being Billy won the 2012 weRead Book Award, and was shortlisted for the Waterstones Children's Book Prize and Branford Boase Award. ** Visit Phil Earle's author website at www.philearle.com. Phil Earle was born, raised and schooled in Hull. His first job was as a care worker in a children's home, an experience that influenced the ideas behind Being Billy and Saving Daisy.

He then trained as a drama therapist and worked in a therapeutic community in south London, caring for traumatized and abused adolescents.

After a couple of years in the care sector, Phil chose the more sedate lifestyle of a bookseller, and now works in children's publishing.

Phil lives in south-east London with his wife and children, but Hull will always be home.