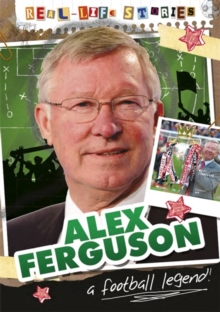 Part of the Real-life Stories series

Find out all about football's most famous coach! Alex Ferguson, has had an amazing career in the beautiful game.

He is famed for his dedication to Manchester United, his passion for football and his determination to win.

Today, he is widely credited as the most successful coach in English football history.

Until his retirement in 2013, Sir Alex Ferguson was the most famous football manager in the world.

During his time at Manchester United, the club won the Premier League 13 times and the FA Cup five times, as well as numerous other titles and trophies.

No other football manager has come close to equalling Fergie's record. This book gives you the story behind this incredible man - from his upbringing in a tough part of Glasgow, through his career as a football player in Scotland, to his 26 years in charge of one of the most famous and successful football clubs in the world. It focuses on his management techniques and his star players, from David Beckham to Ryan Giggs, Eric Cantona, Cristiano Ronaldo and Wayne Rooney, and explains how he transformed Man Utd into a global phenomenon - the club every footballer wanted to play for.

Biographical information, quotes from the man himself, support the narrative. Discover how Alex began his career as a professional footballer, why he decided to become a coach, how he turned Manchester United into one of the world's greatest football teams and why Fergie was the most respected manager in football!

A fantastic resource for biography based project work!