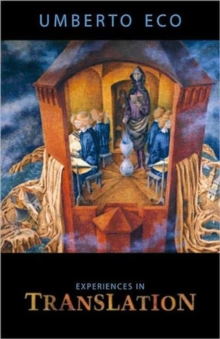 By: Eco, Umberto,  McEwen, Alastair(Translated by)

In this book Umberto Eco argues that translation is not about comparing two languages, but about the interpretation of a text in two different languages, thus involving a shift between cultures.

An author whose works have appeared in many languages, Eco is also the translator of G rard de Nerval's Sylvie and Raymond Queneau's Exercices de style from French into Italian.

In Experiences in Translation he draws on his substantial practical experience to identify and discuss some central problems of translation.

As he convincingly demonstrates, a translation can express an evident deep sense of a text even when violating both lexical and referential faithfulness.

In the second part of his study he deals with translation theories proposed by Jakobson, Steiner, Peirce, and others. Overall, Eco identifies the different types of interpretive acts that count as translation. An enticing new typology emerges, based on his insistence on a common-sense approach and the necessity of taking a critical stance.