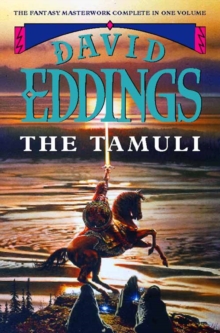 The fantasy masterwork complete in one volume -- 1456 magnificent pages: DOMES OF FIRE THE SHINING ONES THE HIDDEN CITY Prince Sparhawk and Queen Ehlana are married and their union is blessed with a very special daughter named Danae.

But in the Tamul Empire far to the east, unrest of paranormal origin is brewing.

The pre-eminent Styric magician Zalasta suggests that the Empire look to the legendary warrior Sparhawk for help. Trolls despoil Atan in the North, and vampires, werewolves, zombies, ghouls and Ogres form a vast conspiracy to take over the Empire.

Most disturbing of all are reported sightings of Shining Ones among the hordes.

These luminous beings inspire more fear than the rest combined. While Sparhawk resurrects the Blue Rose and battles the enemies of the empire, Queen Ehlana is taken, captive, to the Hidden City of the Cyrgai.

The City is protected by magic and by the invincible Klael.

The ultimate battle must be fought. This spectacular trilogy is fantasy at its best.