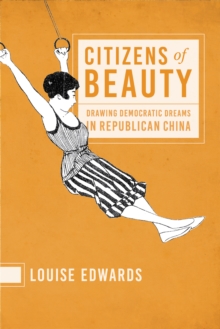 This genre drew upon a centuries-old tradition of books featuring illustrations of women who embodied virtue, desirability, and Chinese cultural values, and changes in it reveal the foundational value shifts that would bring forth a democratic citizenry in the post-imperial era.

The illustrations presented ordinary readers with tantalizing visions of the modern lifestyles that were imagined to accompany Republican China's new civic consciousness. Citizens of Beauty is the first book to explore the One Hundred Illustrated Beauties in order to compare social ideals during China's shift from imperial to Republican times.

The book contextualizes the social and political significance of the aestheticized female body in a rapidly changing genre, showing how progressive commercial artists used images of women to promote a vision of Chinese modernity that was democratic, mobile, autonomous, and free from the crippling hierarchies and cultural norms of old China.