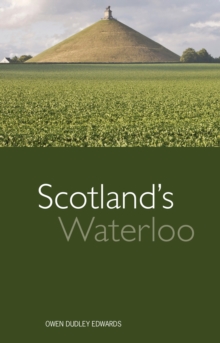 I saw the field of battle It still exhibits a most striking picture of desolation all the neighbouring houses being broken down by cannon-shot and shells.

There was one sweet little chateau in particular called Hougomont which was the object of several desperate assaults and was at length burned to the ground There was an immense carnage on this spot and the stench of the dead bodies is still frightfully sensible.

In art and political rhetoric, the Scots became the poster boys of the British Empire at Waterloo.

Ostensibly fighting alongside England against France, the battle also arguably saw Scotland move away from the Auld Alliance towards identification with the United Kingdom.Scotlands Waterloo concentrates on how the battle was perceived at the time, showcasing the different ways that illustrious Scots documented and responded to the battle in its immediate aftermath.

Owen Dudley Edwards starts with the painters and their patrons, before moving on to the fascinating eyewitness accounts of Scottish soldiers and doctors.

He finally introduces the voices of two of the most famous Scottish writers who experienced the horrific aftermath of the battle first-hand, Sir Walter Scott and Lord Byron.