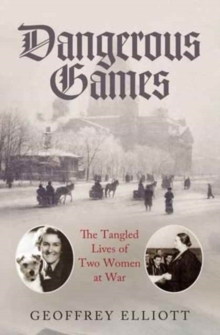 Dangerous games : the tangled lives of two women at war

As Russia slid into anarchy, both families fled for their lives, Lisa's to London and Lily's to Paris.

After a number of posts as a language teacher, she entered University College, London and obtained a First Class degree in Russian in 1924 and a PhD four years later.

During the Second World War she taught Russian to hundreds of students at Cambridge University and then in 1948, was appointed Professor of Slavonic Studies, a post she held for 20 years.

Appointed DBE in 1976, Lisa married for the first time aged 84 and divorced a year before her death.

Lily Sergueiew's short life was in stark contrast to that of her cousin.

After a strict adolescence, Lily trained as a journalist and became fluent in English, German and French.

In the 1930s she embarked on a series of solo adventures, travelling widely in Europe on foot and by bicycle. In Germany during the Nazi regime, Lily once interviewed Hermann Goering, inveigled her way into the trial of the Reichstag arsonists and survived a number of scrapes with the authorities.

After the invasion of France, she agreed to join Germany's intelligence service.

In this role Lily was demanding, uncooperative and in the run up to D-Day, dangerously disruptive.

After D-Day, MI5 dispensed with her services. Lily's attempts to involve her cousin in her espionage activities were much resented by Lisa, who was herself engaged in work for the Ministry of Information.

In addition Lisa regarded Lily as a danger to her career and refused to meet with her.

After the Second World War, the cousins went separate ways.

Lily married an American and moved to the USA where she died aged just 38.

Lisa continued her academic career at Cambridge and for two years in America, with great success.

On her death she was much mourned. In this excellent biography, Geoffrey Elliott vividly describes the chaos of the final years of Tsarist Russia and the desperation of those trying to escape persecution that followed. He portrays Nazi Germany for what it was - riddled with corruption and gross incompetence and reveals the disparate characters of the cousins.

The book is an absorbing study of the lives of two very different women.