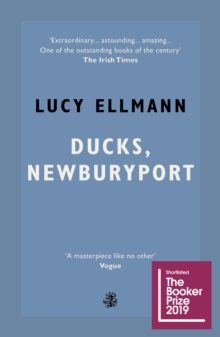 Latticing one cherry pie after another, an Ohio housewife tries to bridge the gaps between reality and the torrent of meaningless info that is the United States of America.

She worries about her children, her dead parents, African elephants, the bedroom rituals of "happy couples", Weapons of Mass Destruction, and how to hatch an abandoned wood pigeon egg.

Is there some trick to surviving survivalists? School shootings? Medical debts? Franks 'n' beans? A scorching indictment of America's barbarity, past and present, and a lament for the way we are sleepwalking into environmental disaster, Ducks, Newburyport is a heresy, a wonder-and a revolution in the novel.

It's also very, very funny. "A 900-page novel in a single sentence? If that sounds like your kind of thing (and if it does, I like you already), then look out for Ducks, Newburyport, a wildly ambitious and righteously angry portrait of contemporary America." -OBSERVER FICTION PICKS, 2019 "Lucy Ellmann's Ducks, Newburyport, is already being hailed as a modernist masterpiece.

Following the inner thoughts of an Ohio housewife, it's one sentence long, nine hundred pages... and my kind of fun." -THE HERALD FICTION PICKS, 2019 "Lucy Ellmann's Ducks, Newburyport has been making headlines as a book to watch in 2019 - and with good reason." -THE IRISH TIMES"The advent of Ducks, Newburyport, Lucy Ellmann's 900-page single-sentence novel, has set stylists slavering. .

From the first chapter, which is available to read online, it appears to be a bravura feat: a stream of consciousness, a transcript of the mind under modern conditions, and (as a consequence of Ellmann's ferocious and succinct wit) very funny." -THE SCOTTISH REVIEW OF BOOKS FICTION PICKS, 2019"A contemporary Molly Bloom soliloquy, a paginated lioness, a corrective, a challenge - and perhaps the most ambitious novel of 2019." -PORTER SQUARE BOOKS"Endless, moving, endlessly moving - this is the novel of the decade." - CHRISTOPHE CLARO (WRITER AND TRANSLATOR OF THOMAS PYNCHON) "Lunatic and splenetic and distinctive - I begin to suspect Lucy Ellmann might be some kind of genius." --THE TELEGRAPH"It is somehow hard not to feel optimistic in the hands of a writer so fierce and intelligent." --THE GUARDIAN"Hilarious, eye-wateringly funny...

I have found a new hero in Lucy Ellmann." --THE SCOTSMAN