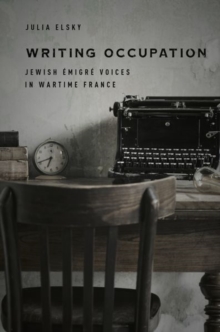 Part of the Stanford Studies in Jewish History and Culture series

Among the Jewish writers who emigrated from Eastern Europe to France in the 1910s and 1920s, a number chose to switch from writing in their languages of origin to writing primarily in French, a language that represented both a literary center and the promises of French universalism.

But under the Nazi occupation of France from 1940 to 1944, these Jewish emigre writers-among them Irene Nemirovsky, Benjamin Fondane, Romain Gary, Jean Malaquais, and Elsa Triolet-continued to write in their adopted language, even as the Vichy regime and Nazi occupiers denied their French identity through xenophobic and antisemitic laws.

In this book, Julia Elsky argues that these writers reexamined both their Jewishness and their place as authors in France through the language in which they wrote.

The group of authors Elsky considers depicted key moments in the war from their perspective as Jewish emigres, including the June 1940 civilian flight from Paris, life in the occupied and southern zones, the roundups and internment camps, and the Resistance in France and in London.

Writing in French, they expressed multiple cultural, religious, and linguistic identities, challenging the boundaries between center and periphery, between French and foreign, even when their sense of belonging was being violently denied.