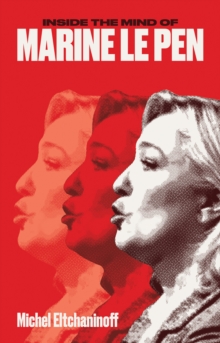 Inside the mind of Marine Le Pen

Has her party really changed its ways, or is she merely rebranding its old ideas and policies for a new era?

In the age of Brexit and Trump, France too has seen a growing audience for identity-based politics.

Under 'Marine', the FN is enjoying unprecedented success.

But what's her secret? This is a probing investigation into the philosophy of Marine Le Pen's FN.

It seeks answers in her speeches, in the history of French nationalism and in revealing interviews with those on the far right--including Jean-Marie Le Pen himself. Michel Eltchaninoff exposes a vision of France tyrannised by liberalism and seduced by the offer of an uncompromising alternative: a Republic 'beyond Left and Right', defined by its enemies and aligned with Putin's Russia.

Whatever Marine Le Pen is thinking, she has not forgotten the FN's roots.

The French far right is now stronger than ever.