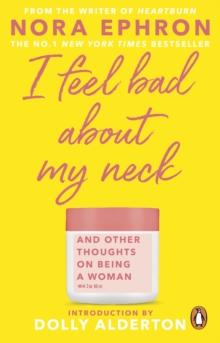 I feel bad about my neck : and other thoughts on being a woman

By: EPHRON, NORA,  Alderton, Dolly(Introduction by)

'Nora's exacting, precise, didactic, tried-and-tested, sophisticated-woman-wearing-all-black wisdom is a comfort and a relief.' - Dolly AldertonNow with an introduction from Dolly Alderton, author of Everything I Know About Love, revealing how a new generation of women can take inspiration from Nora's sharp wit and wisdom about life. * Never marry a man you wouldn't want to be divorced from. * If the shoe doesn't fit in the shoe store, it's never going to fit. * When your children are teenagers, it's important to have a dog so that someone in the house is happy to see you. * If only one third of your clothes are mistakes, you're ahead of the game. * Anything you think is wrong with your body at the age of thirty-five you will be nostalgic for by the age of forty-five. __________________________________________________________________'I give this as a present more than other book.

I don't know how she did it' Phoebe Waller-Bridge'I am only one of millions of women who will miss Nora's voice' Lena Dunham'Oh how I loved Nora Ephron' Nigella Lawson'Funny, knowing and smart' India Knight'The book that most influenced me' Lily Allen