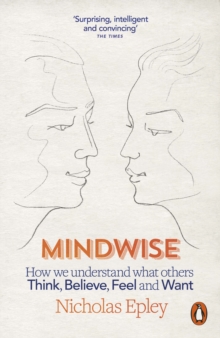 Mindwise : how we understand what others think, believe, feel and want

In Mindwise, renowned psychologist Nicholas Epley shows that this incredible capacity for inferring what others are thinking and feeling is, however sophisticated, still prone to critical errors.

We often misread social situations, misjudge others' characters, or guess the wrong motives for their actions.

Drawing on the latest in psychological research, Epley suggests that only by learning more about our sixth sense will we have the humility to overcome these errors and understand others as they actually are instead of as we imagine them to be. 'Lucid and magnetic ... a guide to understanding the minds of others' Independent 'A comfortingly slim volume about the ability we all have to understand others ... how wonderful to have this insight into the extent of our ignorance' - Dominic Lawson, Sunday Times Nicholas Epley is the John T.

Keller Professor of Behavioral Science at the University of Chicago Booth School of Business.

He has written for The New York Times, and has published over 50 articles in two dozen journals in his field.

He was named a "Professor to Watch" by the Financial Times, is the winner of the 2008 Theoretical Innovation Prize from the Society for Personality and Social Psychology, and was awarded the 2011 Distinguished Scientific Award for Early Career Contribution to Psychology from the American Psychological Association.

He lives in Chicago.