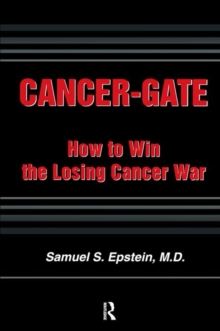 Cancer-gate : How to Win the Losing Cancer War

Part of the Policy, Politics, Health and Medicine Series series

Award-winning author, Samuel S. Epstein, M.D., whose 1978 book ""The Politics of Cancer"" shook the political establishment by showing how the federal government had been corrupted by industrial polluters, has written a book that is sure to be of equal consequence. ""Cancer-Gate: How to Win the Losing Cancer War"" is a groundbreaking new book.

It warns that, contrary to three decades of promises, we are losing the winnable war against cancer, and that the hand-in-glove generals of the federal National Cancer Institute (NCI) and the private ""nonprofit"" American Cancer Society (ACS) have betrayed us.These institutions, Epstein alleges, have spent tens of billions of taxpayer and charity dollars primarily targeting silver-bullet cures, strategies that have largely failed, while virtually ignoring strategies for preventing cancer in the first place.

As a result, cancer rates have escalated to epidemic proportions, now striking nearly one in every two men, and more than one in every three women.