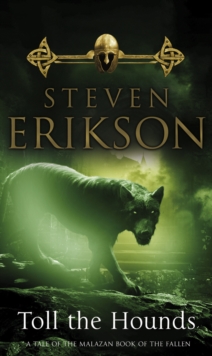 Part of the The Malazan Book of the Fallen series

The eighth book in Erikson's acclaimed Malazan Book of the Fallen fantasy sequenceIt is said that Hood waits at the end of every plot, every scheme, each grandiose ambition.

But this time it is different: this time the Lord of Death is there at the beginning... Darujhistan swelters in the summer heat and seethes with portents, rumours and whispers.

Strangers have arrived, a murderer is abroad, past-tyrannies are stirring and assassins seem to be targeting the owners of K'rul's Bar.

For the rotund, waistcoat-clad man knows such events will be dwarfed by what is about to happen: for in the distance can be heard the baying of hounds. Far away, in Black Coral, the ruling Tiste Andii appear oblivious to the threat posed by the fast-growing cult of the Redeemer - an honourable, one-mortal man who seems powerless against the twisted vision of his followers.

So Hood waits at the beginning of a conspiracy that will shake the cosmos, but at its end there is another: Anomander Rake, Son of Darkness, has come to right an ancient and terrible wrong... Archaeologist and anthropologist Steven Erikson's debut fantasy novel, Gardens of the Moon, was shortlisted for the World Fantasy Award and introduced fantasy readers to his epic 'The Malazan Book of the Fallen' sequence, which has been hailed 'a masterwork of the imagination'.

This River Awakens was his first novel, and originally published under the name Steve Lundin. Having lived in Cornwall for a number of years, Steve will be returning to Canada in late summer 2012.